Several repellents are registered for use to prevent deer damage to plants, including putrescent whole egg solids, ammonium soaps, thiram, capsaicin, garlic, and blood meal. Several home remedies, such as human hair and soap are reported to be effective, but research does not support these claims. In general, the effectiveness of repellents is highly variable and dependent on alternative resources, deer densities, habituation, and motivation of individual deer. Repellents must be reapplied every 4 to 5 weeks if deer feeding pressure is high, and those applied to plants must also be reapplied to new growth. In the northeast, cold temperatures and snow limit applications during the winter months when deer damage to woody ornamentals and young trees is greatest.

From NextDoor in River Ridge

Many of us in River Ridge received new trees from the city today (29 trees today alone!), and many more will be planted within this week. The trees are NOT deer resistant, so your tree might need a little help from you to survive.

Here are some tips:
1. Protect the trunk with tubing, chicken wire, or other fencing wrapped around the trunk.
2. If the lowest branches are within easy reach of deer (lower than 5 feet), you might want to protect them with netting, with fencing around the tree, or another method such as strings staked around the tree at about 3′ and 5′ above the ground.

For the common areas (centers of the “circle” streets), I hope everyone will pitch in to try to protect the trees. My son and I are going to use the extra fencing we have on a few of the trees in Balmoral circle. We’re also going to try tying a few mylar strips on the trees, with the hopes that they will spook the deer.

Enjoy our lovely tree and let’s try to help them survive!

I came across this powerpoint presentation from Bloomington, IN while researching deer density issues.
Very well done and talks about indicator species and well as growth of the deer population over time.

May be causing major and irreversible ecological effects

2012 RECOMMENDATION #1
FEEDING BAN ORDINANCE
The Rochester Hills City Council passed an ordinance in September 2008 preventing the feeding of wild animals other than birds. This feeding ban is intended to reduce the current travel patterns of deer from their natural habitat into subdivisions where feeding stations and bait piles were provided. The supplemental feeding of wildlife is disruptive to their natural feeding habits. While some residents enjoy recreational viewing of deer; this action is detrimental to the animals, attracts predators and nuisance species (raccoons, coyotes, rats, etc.); and can draw deer seeking food to cross heavy traffic areas, causing deer/vehicle accidents.
While the statewide feeding ban has been lifted for 2011, the committee recommends this local ban should continue for 2012. [and still in effect]

Some behaviors deer exhibit that may be useful in developing a deterrent plan.

Well, this tells us how deer behave. Going to be tough to come up with real deterrents.

The Michigan Botanical Club, a State Wide organization devoted to the study and conservation of native plants as well as educational programs about native plants, has an active Chapter, The Huron Valley Chapter, centered in the Ann Arbor area and meeting at the Matthaei Botanical Gardens.

Many of our members have lived in the Ann Arbor area long enough to have seen the dramatic declines in wildflowers in many of the treasured woodlots in the Ann Arbor area in recent decades. As deer exclosure experiments have repeatedly shown in Michigan and other areas, much of this loss, especially in sensitive plant
groups like native orchids and conspicuous species such as trilliums and lilies, is due to excessively high deer populations. The detrimental effects of high deer populations on tree reproduction are also well known, and deer are also implicated in disturbances promoting invasive species. This is all in addition to the considerable monetary impact that high deer populations have in destroying landscaping in resident’s yards and generating more numerous deer-car collisions, to say nothing of potentially entrenching Lyme disease in our area.

Deer will always be a part of our environment, but the Huron Valley Chapter of the Michigan Botanical Club strongly supports an effective deer management plan including culling in Ann Arbor. We owe it to future generations living in Ann Arbor to manage deer populations so they are at levels that our natural environments and parks can sustain without serious degradation. 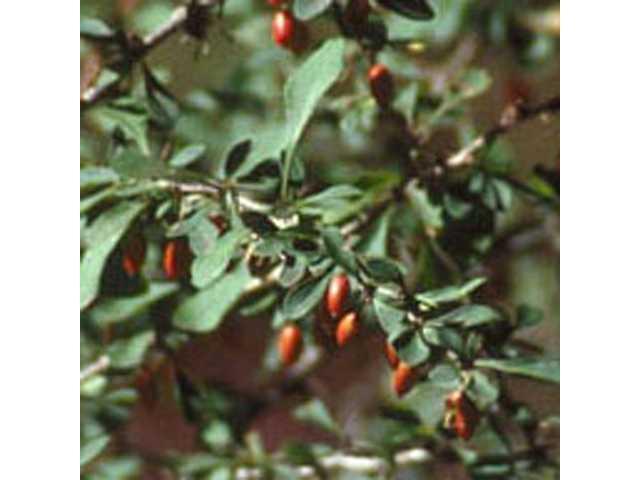 Looking for plants that are deer resistant for your garden or landscaping? Barberry shows up on most listings.

It is used widely as landscape material, due in part to its resistance to deer browsing. And its true, unless absolutely necessary– deer will avoid eating barberry, though in Ann Arbor there have been reports of hungry deer eating it.

Not only in cultivated plantings and gardens– we find barberry in forests, wildlands and parks. And we are finding that where deer numbers are high, that the tastier, native species are being replaced by barberry.

More disturbing, however, is that we are finding that planting Japanese barberry, or any other kind of barberry, is not an ideal.

“Blacklegged tick densities were significantly greater in areas of full barberry compared to no barberry and managed barberry. Furthermore, with infection prevalence similar in ticks between treatments, there was significantly more B. burgdorferi-infected ticks in areas of full barberry compared to plots containing no barberry or managed barberry.”
from University of Connecticut [email protected] Master’s Theses, University of Connecticut Graduate School, 8-12-2014, Trophic Cascade Effects of Deer Overabundance on Connecticut’s Native Vegetation and Small Mammal Populations.

“Deer eat everything but barberry, and because they don’t eat barberry, they’re weeding out forests. They’re helping promote the invasive species,” explains Jeff Ward, chief scientist for the Department of Forestry and Horticulture at the Connecticut Agricultural Experiment Station (CAES).

Thanks to Bambi’s distaste for its harsh chemicals and spiny branches, Japanese barberry is left alone to thrive while other plants such as red trillium get shaded out or nibbled to the ground. Barberry, Bambi and bugs: The link between Japanese barberry and Lyme disease

Japanese barberry is an especially troublesome invasive plant. It upsets the natural flow of ecosystems by making it difficult for indigenous species to thrive in their native environment. Japanese barberry houses deer ticks which can carry Lyme disease. Lyme disease is a large issue in the Northeastern United States. Additionally the Japanese barberry encourages the development of the red wiggler worm, another invasive creature. The Japanese barberry deprives native plants of nutrients, thus killing them. The dead vegetation becomes leaf litter, which red wigglers consume. These creatures are relentlessly ravenous; thus, they eat the duff layer which typically provides a home for tiny forest-dwelling animals.

Barberry stunts the growth of local trees because it lowers the pH of the soil around the plant.
The Web of Life: The Effect of the Invasive Berberis thunbergii on Ixodes scapularis

More Findings on the Link Between Japanese Barberry and Lyme Disease

Or do a search yourself on “deer tick barberry”

The deer browse figures compiled in this survey may underestimate actual browse damage in several ways. First, the survey excluded plants that were already dead or lacked live buds for identification. Many of the excluded plants showed clear signs of deer browse, which suggests that browse damage could be contributing to mortality, but estimating browse-related mortality was beyond the scope of this study. Numerous other studies suggest that browse damage over several decades may already have eliminated or greatly reduced populations of deer-preferred species. Second, it is not possible to count how many buds are missing from a plant, so we focused on the number of branches browsed. However, some unbrowsed branches were counted even if they were quite small, while the portions of branches browsed off may have been larger than those that remained. Third, we assessed browse damage on all species, rather than on a set of species known to be preferred by
deer; damage on preferred species could be even higher.

Conclusion
This survey of 142 tree saplings (less than 2 meters tall) and shrubs in Bird Hills Nature Area shows that 80% have been browsed by deer, and 51% have half or more branches browsed. This level of browsing could interfere with forest regeneration and diminish the flowers and fruit available for birds, butterflies, and bees. Further monitoring would be necessary to track mortality, to reveal whether particular tree and shrub species of concern are browsed in future years, and to assess whether wildflower species are also being heavily browsed.

Corn, especially this time of year, CANNOT BE DIGESTED by deer. Lots of articles on this including a chapter in Deerland. Knock on their door and tell them about acidosis.

The problem is that deer digestion is a finely tuned physiological process. Just the right combination of microorganisms, enzymes, and pH enable deer to digest a normal winter diet of woody vegetation. When offered a sudden supply of corn, a deer’s digestive system doesn’t have time to adjust to a high carbohydrate diet. The result can be acute acidosis followed by death within 72 hours.

At the time of death these individuals can appear normal and well fed. It’s just that they cannot digest the corn. Within six hours, corn alters the environment in the rumen. It turns the rumen acidic and destroys the microbes needed for normal digestion.

Not all deer die immediately from acidosis. Its effects vary with the age and health of the individual. Some may simply slow down, get clumsy, and become easy prey to speeding traffic and hungry coyotes.

It takes deer two to four weeks of feeding on a new food source to establish populations of microbes necessary to digest the new food. It can’t happen in just a few days during a snowstorm. And healthy individuals that might survive in the short term often succumb to complications weeks later.