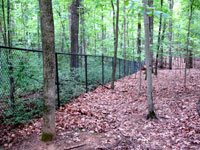 The deer expanding population problem has made it to national news lately:

If you thought you were safe from Lyme disease because you don’t live in New England, where the tick-borne illness first appeared, think again. Now, 100 percent of the country — all 50 states plus the District — has residents who have tested positive for Lyme, a bacterial infection that can cause a wide variety of symptoms, including joint aches, fatigue, facial palsy and neck stiffness.

Here’s why there are so many coyotes and why they are spreading so fast, Washington Post, May 22, 2018

Coyotes do not breed like rats, but they could hold their own in a contest. It is an animal that, when threatened, somehow reacts by making more coyotes, becoming stealthier, nearly impossible to find even as their numbers grow.

CDC apologizes for hiding ticks on a poppyseed muffin to warn of Lyme disease threat, USAToday, May 8, 2018

This Scary New Report Shows How Unprepared We Are to Fight Tick- and Mosquito-Borne Diseases, MotherJones.com, May 4, 2018

The federal government has stepped up its efforts in the last few years. In 2016, Congress authorized the CDC to use an additional $350 million to fight the mosquito-borne Zika virus—the agency used some of that money the following year to launch five new research centers to study vector-borne diseases. Congress also established the Tick-Borne Disease Working Group in 2017. West Nile hospitalizations have cost nearly $800 million since 1999.

No one really knows exactly how much vector-borne illnesses cost the nation, because so many cases go unreported. But CDC spokesman Benjamin Haynes told me the annual estimated cost for Lyme tests alone is about $492 million. Since 1999, he added, the costs associated with hospitalizing people sickened by West Nile are estimated at $778 million. Yet in 2018, the budget for CDC’s Division of Vector-Borne Diseases is less than $50 million, with $10.6 million of that dedicated to Lyme disease.

Diseases spread by ticks, mosquitoes and fleas more than tripled in the U.S. since 2004, Washington Post, May 1, 2018

But other factors also play a role. The number of Lyme disease cases has increased rapidly because the population of deer — and deer ticks — has skyrocketed. “In New England 100 years ago, there were hardly any trees because they were all cut down for farmland, and the deer had been hunted to extinction,” he said. “All those forests have grown back, the deer population exploded, and the tick populations have also exploded, bringing more disease.”

Hunting is down in the US. The Trump administration wants to change that, CNN, Sept 22, 2017 Scientists had been putting the CRISPR tools into their target cells as separate pieces. What if you introduced them into the embryos as a single, heritable element? Those creatures and their descendants—all of them—would retain the gene-editing ability in their DNA. The system would be self-propagating. In short, you could rig nature’s game so your gene would win every time!

But one could build, for instance, a drive targeting Aedes mosquitoes that leaves their offspring unable to reproduce, or one that makes Anopheles mosquitoes unable to transmit malaria. You could design a drive to control a stubborn crop pest or to render white-footed mice incapable of acting as a vessel by which ticks pick up and spread Lyme disease.

Md. approves use of deer birth control, Washington Post, May 5, 2011

“This is the only immuno-contraceptive for deer that has federal approval,” said Paul Peditto, director of the Wildlife and Heritage Service. “It was developed by the U.S. Department of Agriculture and is registered with the Environmental Protection Agency.

Peditto said the manpower and expense of applying the birth control chemical will limit its use. “It will cost up to $1,000 to apply it to a deer,” Peditto said. The deer must first be shot via dart gun to tranquilize it before Gonacon can be injected. EPA requires that the deer be tagged so that it can be identified as having been treated. Another tag will state that the meat of the animal should not be consumed by humans.