Insurance policies may not cover accidents with deer, KOMU, Oct 21, 2015

Ellisville Police Chief Tom Felgate told the council that the city would purchase two silencers for police issue rifles, 500 special bullets designed to prevent over-penetration and corn to be used as bait. The rest of that money will go towards overtime pay for two police officers and one public works employee during the hunts, as well as $100 dollars per deer culled. The deer meat collected would be donated to the Share the Harvest program, which distributes the meat to families in need.

One of the other options Felgate presented to the council was to contract with White Buffalo, a deer culling service used by nearby Town & Country. This service would cost the city $300-$400 per deer killed and processed over a 10-day period.
Chronic Wasting Disease in deer is a growing concern in Missouri, Ledger Enquirer, June 3, 2015

The reasoning? Young bucks are most apt to travel and potentially transmit the disease. By increasing the harvest of those deer, it would be one more preventative step. 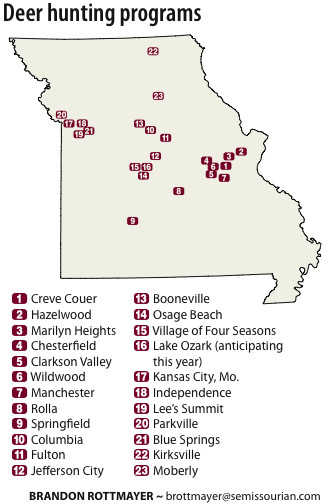 Twenty-three cities in Missouri currently allow residents to participate in managed bow hunts to curtail growing deer populations that were blamed for an increase in deer-vehicle collisions and lawn destruction. Others are considering it, including Ballwin and Ellisville.