In the blacklegged tick/Lyme disease ecological web, small rodents like mice and chipmunks, in particular, are key reservoir hosts. Immature stage ticks blood feeding on infected rodents can become infected, and later pass that infection when they blood feed again. Adult stage blacklegged ticks are unsuccessful in blood feeding on small rodents; in fact, a very small proportion of the population successfully blood-feeds on medium-sized mammals, either.

While rodent-derived blood meals provide nourishment for immature tick stages to develop, those animals contribute little to the ultimate reproduction process in blacklegged ticks, which is growth of the egg stage. In contrast, adult stage blacklegged ticks commonly blood feed on deer, becoming engorged and obtaining all of the protein necessary for laying their clutch of 1,500-2,000 eggs. For various reasons, few other animals are as efficient in providing the population of adult blacklegged ticks with this all important blood meal, so we label deer as reproductive hosts in the blacklegged tick/Lyme disease system. – TickEncounter Resource Center

The lone star tick could soon be colonizing a backyard near you, CNN, Dec 4, 2019

Lyme disease is spreading across Michigan. But why?, Bridge, July 1, 2019

Post-Treatment Lyme Disease Syndrome Cases Are on the Rise, and Doctors Don’t Know Why, Newsweek, May 15, 2019

The Lyme threat, and how islands are responding, IslandInstitute, April 18, 2019

“Ticking Bomb”: The Impact of Climate Change on the Incidence of Lyme Disease, Canadian Journal of Infectious Diseases and Medical Microbiology, Sept 2018 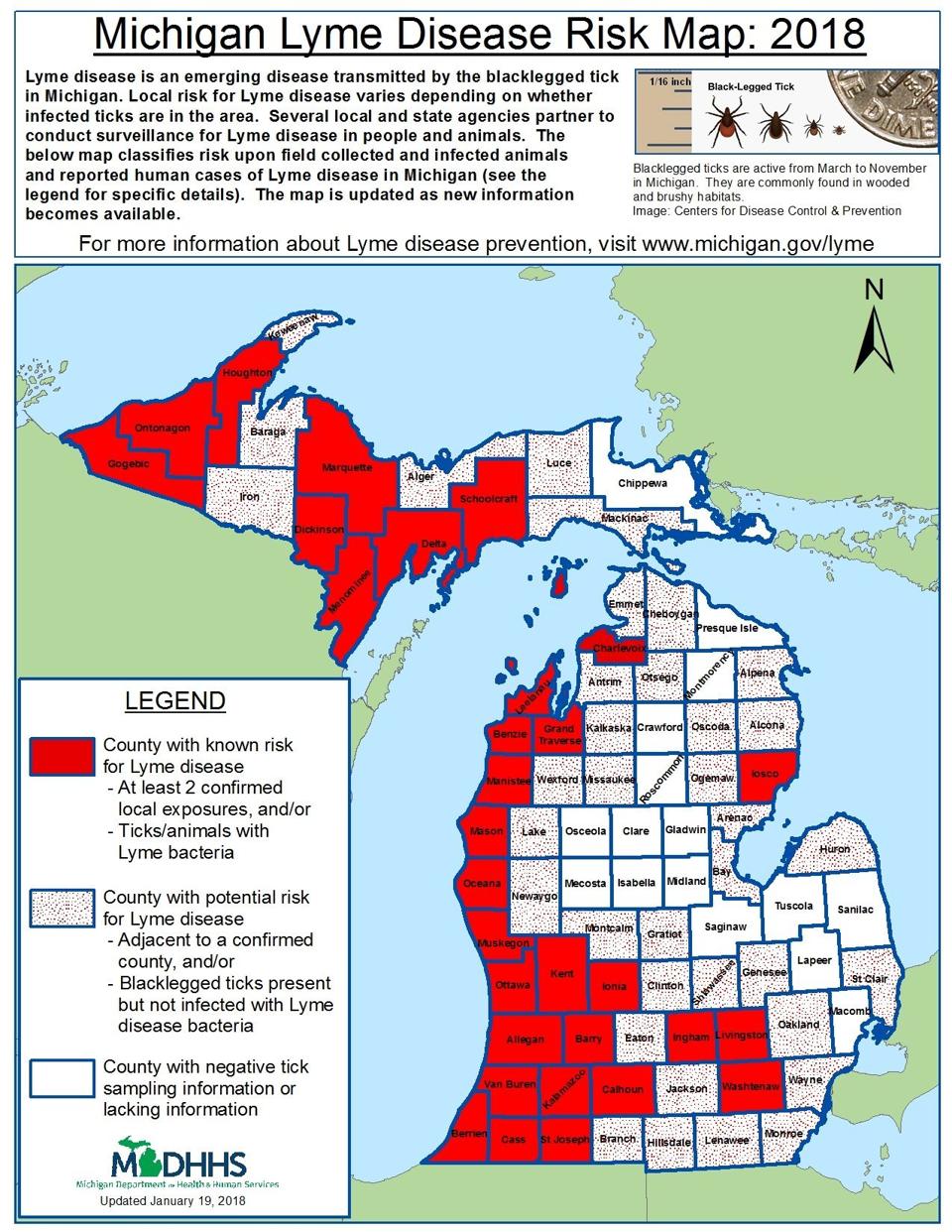 An Army Of Deer Ticks Carrying Lyme Disease Is Advancing And Here’s Why It Will Only Get Worse, Huffington Post, Aug 7, 2018

The Scourge: How to Win the Battle Against Disease-Carrying Ticks, Outdoor Life, Jan 16, 2018

In Michigan, the first official reported human case of Lyme disease was in 1985. Cases have now been reported in both the upper and lower peninsula and are increasing. It is anticipated that the number of cases reported will continue to increase due to public and medical personnel education, and expanding tick ranges.

Research institute scientists have been studying how deer ticks live through winter, and the results so far suggest that ticks can survive a harsh Maine winter, at least by recent standards, especially when the ticks are covered by leaves and snow. How Lyme disease might be triggering hundreds of suicides, USA Today, July 19, 2017

Blacklegged ticks are a problem. What this area is doing to fight them, USAToday, July 5, 2017

Lyme disease cases among children are on the rise in western Pennsylvania, Medical Press, June 20, 2018

Why parents are sending their kids to school with bug spray, New York Post, May 20, 2017

The Coming Pandemic of Lyme Dementia, Psychology Today, May 29, 2017

Alec Baldwin Thought He’d ‘Die of Lyme Disease’ – What to Know About the Tick-Borne Illness, Boston Herald, May 23, 2017

Lyme Disease on Rise Amid Diagnosis, Treatment Controversy, USNews, May 20, 2017

Experts caution public leading up to peak season for Lyme disease, GazetteExtra, May 10, 2017

Forbidding Forecast For Lyme Disease In The Northeast, NPR, March 6, 2017

Forbidding Forecast For Lyme Disease In The Northeast, NPR, March 6, 2017

Nervous system . Any of the following signs that cannot be explained by any other etiology, alone or in combination: lymphocytic meningitis; cranial neuritis, particularly facial palsy (may be bilateral); radiculoneuropathy; or, rarely, encephalomyelitis. Headache, fatigue, paresthesia, or mildly stiff neck alone, are not criteria for neurologic involvement.

Cardiovascular system . Acute onset of high-grade (2nd-degree or 3rd-degree) atrioventricular conduction defects that resolve in days to weeks and are sometimes associated with myocarditis. Palpitations, bradycardia, bundle branch block, or myocarditis alone are not criteria for cardiovascular involvement.

Warming Climate May Limit Lyme Disease’s Spread in Parts of the U.S., Inside Climate News, Jan 19, 2017

Deer and Lyme Disease Are Intertwined, The Vineyard Gazette, Jan 12, 2017

Something to Grapple with: How Wily Lyme Disease Prowls the Body, Scientific American, Aug 25, 2016

The researchers watched through a microscope as bacteria, tagged with green fluorescent protein, moved across the cells in real time. The researchers discovered that B. burgdorferi relied on a protein called BBK32-which had previously been implicated in studies in mice-to tether themselves to the endothelial cells. BBK32 acted like an exceptionally strong bungee cord, helping the bacteria accelerate through the vessels or decelerate when they needed to get out of the bloodstream and into surrounding tissue.

I Was Diagnosed With Lyme Disease – And Then It Wouldn’t Go Away, Good Housekeeping, July 29, 2016

When Brandi finished the medication, though, the symptoms roared back?-?which was why she had returned to see her primary care doctor that day in 2011. “He went through my records and said, ‘I don’t think you have Lyme, because Lyme symptoms are more flu-like,’?” she says. “He gave me Ativan for my dizziness and Zoloft for anxiety and sent me on my way.”

A second opinion confirmed that she had a persistent Lyme infection?-?what’s now known as Post-Treatment Lyme Disease Syndrome (PTLDS). That doctor prescribed a month of IV antibiotics?-?which Brandi gave herself twice a day through a catheter in her arm?-?as well as plenty of rest and a healthy diet. “At that point I would have done just about anything to feel better,” she says. It took four years, but eventually she did.

Taking The Battle Against Lyme Disease Ticks To The Backyard, NPR, July 20, 2016

“It’s a very complicated and confusing disease,” says artist Ally Hilfiger, daughter of designer Tommy Hilfiger. “A lot of people get bitten by a tick, get a positive test result, go on antibiotics, and-bam- are better in 30 days. For those who don’t, it’s completely crippling and it steals your life.” At age 18, Hilfiger crash-landed at Silver Hill, in the middle of a mental breakdown, and soon was diagnosed with Lyme. At seven she was bitten by a tick, and then 11 years of clinical limbo, because of repeated false negative test results, clouded what should have been an idyllic childhood in Greenwich, with pain, fatigue, and illness.

On the human level, the situation calls for both common sense and desperate measures. More and more communities are culling their deer populations; on Monhegan Island, Maine, this approach virtually eradicated the disease.

The incidence of Lyme disease is on the rise in the United States. Hoffmann noted that due largely to climate change, the geographic regions suitable to ticks are getting larger. While the factors involved are very complex, Hoffmann added this will likely continue in future decades. The diagnosis has rate has gone up by 8% across the U.S. in the last 10 years.

A Report from the Integrated Tick Management Symposium in Washington, DC, Entomology Today, May 20, 2016

The blood-sucking pests can also pass on other pathogens and parasites as they ingest host blood and regurgitate saliva into host skin wounds. For example, deer ticks are believed to vectors for bacteria that cause human granulocytic anaplasmosis or tick-borne relapsing fever; the parasite behind babesiosis; and the Powassan virus, which can produce fevers, flu-like symptoms, and, in some cases, encephalitis.

There’s A New Species Of Bacteria That Can Cause Lyme Disease: CDC, Medical Daily, Feb 8, 2016

Lyme disease–carrying ticks are now in half of all U.S. counties, Science, Jan 18, 2016

Ticks that carry Lyme disease live in almost half of US counties – study, The Guardian, Jan 18, 2016

A brief update on Lyme disease in Michigan and what does the future hold?, Michigan State University, 2015

It is possible that more than one pathogen may pass to a human from one tick bite (for example, Lyme disease and babesiosis).

It’s Lyme Disease Season: What To Know About Contracting, Diagnosing And Treating The Disease, The Diane Rehm Show, July 8,2015

Hunting is essential to managing the deer population, but the practice is still curtailed in many eastern Massachusetts communities, making it unlikely the Lyme epidemic will subside in the near future, Telford said.
“It’s probably too late for us, but boy wouldn’t it be nice if our grandchildren didn’t have to worry about this,” he said.

The Relationship Between Deer Density, Tick Abundance, and Human Cases of Lyme Disease in a Residential Community, Journal of Medical Entomology, July 2014

May is Lyme disease awareness month, Michigan Journal, May 18, 2015 House Resolution No. 352 declaring May 2014 as Lyme Disease Awareness Month in the state of Michigan passed.

What’s true and what’s not about Lyme Disease in Washtenaw County?

Douglas Flamboe of Holland told WZZM 13 he often tells people he wishes he had cancer, “because then the government and insurance companies will let the doctor do whatever and anything needed to cure it. With Lyme, you’re just stuck. Each year it gets worse and you can do less, until for many in this country, it takes your life.” Flamboe says the disease has “destroyed” his life at age 52. He was bit by a tick while camping at Holland State Park in 2010.

Lyme disease cases are on the rise, Columbus Dispatch, Sept 4, 2015

Scientists and health professionals tell us today that the entire New England region supports a potent combination of weather and humidity, mice and other small rodent populations, dense thickets of invasive barberry and, most importantly, overabundant deer populations to serve as the blood meal for the nymphs of deer ticks to emerge as egg-laying adults.

In tick-infested areas, your best protection is to avoid contact with soil, leaf litter and vegetation.

For those belonging to high-risk groups (e.g., the very young, elderly and immune-compromised individuals), threats of infection and death are significantly increased. The prevalence of asymptomatic cases of babesiosis is also problematic. Since there is no approved screening test for this disease in blood donors or donated blood products, seemingly healthy individuals can pass life-threatening infections to recipients via donated blood. According to a study published in 2011 in the Annals of Internal Medicine, at least 159 cases of babesiosis resulted from transfusions with infected blood or blood components between 1979 and 2009 (with the most occurring between 2000 and 2009). Many of these cases involved premature infants or elderly surgical patients already struggling with other health issues.

Yet no state funds are dedicated to tick-borne diseases, one of which, Lyme, infects at least 5,500 residents a year in Massachusetts and likely many more.
Ticks and Lyme have spread across Massachusetts in the past 40 years to become one of the region’s most commonly reported infectious diseases, yet the state’s public health priorities have not kept pace. Two years ago, a special state Lyme commission suggested a modest investment of less than $300,000 for a public education program, yet no money has been set aside, and the commission’s other specific recommendations –- from promoting more awareness in the medical community to better disease surveillance –- have not been adopted.

Avril Lavigne on Her Struggle With Lyme Disease, NBCNews.com, April 1, 2015

Avril Lavigne Opens Up About Her Struggle With… by trendworld

The emergence of Lyme disease, Journal of Clinical Investigation, April 2004

The Biological and Social Phenomenon of Lyme Disease, Science, 1993